We had an EXCELLENT time!!! Besides being a real eye-opener on how the other half of the world lives, it was a great holiday. The resort was a 4-star, so not fancy-schmancy. However, that's not what we were looking for (nor wanting to pay for). The place was clean, air-conditioned, and had good food which varied slightly through the week. We had ocean-view rooms and so we were able to listen to the sound of the waves all night. Just like home. :) (Yes, we were right on the ocean, not just a distant glimpse with a long walk to get there)

We did a few excursions! White-water rafting, Quad/dune-buggy, snorkeling. We spaced them out with one day in between, so we were able to recuperate, just in case we needed it. Paul and Alia were on the quads, while Miranda and I shared the dune buggy. I liked the idea of being able to push one pedal to make it go, another to make it stop, and steering was simply turning the wheel. The quads had their own little issues. I.E. Paul's brakes didn't work so well, and the throttle stuck. Steering them was difficult... not very well-maintained. I guess it's hard when you don't have easy access to parts and service.

Anyway, dune buggying was fun! Even Miranda got a turn to drive. Since the buggy sits lower to the ground, the two of us were covered to the eyebrows within two puddles. When she had the wheel, she steered us into two of the biggest, dirtiest, muckiest, mud puddliest puddles. The video that the tour guide shot shows our buggy engulfed in a dome of flying muck! What fun! The tour involves a stop off at a river where everybody pretty much lays down in the water to rinse off. Little kids showed up to help get the worst of the muck off. I'm really glad that I brought chocolate bars (from halloween) to give away!!

We had a 2-hour drive to get to the mountains where we started our rafting. It was a great opportunity to see some of the countryside. It's a beautiful place. I managed to get a few pictures, but since the vehicle was moving, some of the photos (actually most of them) are a bit blurry and I'm not sure whether I should bother saving or posting them. We drove through Santiago, one of their bigger cities, and I tell you, what a craaaaazy place to drive! I wondered whether there were actually any rules to driving on the roads! Tons of motorcycles... they sort of flock like birds on the street. Motorcycles are the major form of taxi. They allow a maximum of 5 on a bike!!! Vendors stand next to the roads and sell everything from pineapples to cell phones, newspapers to chickens. Crazy!

The rafting was lots of fun once we got there. Again, some video, but with our little camera. It was taken by one of the guides who had our camera in his wet-bag. We had bought a waterproof camera at Christmas with the idea of using it on this trip, but the electricity cut out that night (Haiti thing) and so the battery wasn't charged.  I had to take my little Coolpix instead, and it spent most of its time in the wet-bag. Paul, Alia, and Joe jumped off a cliff and I've got that on video!

Alia has some pictures posted on her Facebook, as well as a video we shot of the snorkeling on Paradise Island.

Ooooh... snorkeling! Wow!!! It was super! It involved another long bus ride, about 2 1/2 hours drive, but again, worth the trip. The drive there and back was another adventure. Gorgeous countryside, but the people don't have it easy. There's such extreme poverty. Many of them literally live in shacks with dirt floors. Not much money going around. It makes you appreciate what you've got at home.

Snorkeling at Paradise Island... We had to take a boat to get to the little island where we snorkeled. What an absolutely beautiful place! It's just a small island that you can almost spit across on a windy day, and they've got 6 huts set up on it. Three tour groups, 2 huts apiece. One of "our" huts was the bar/beverage place, the other was where they kept the equipment. If you EVER get the chance to snorkel in a reef... take it! It was definitely worth it!

We had a bit of rain when we first got to the Dominican. Three days of it, actually. Nothing torrential, just showers and overcast skies. We went for walks along the beach. It was a good way to get used to the temperature without roasting ourselves. We had sun from Sunday until the day we left. We all got a bit of colour, although some of us were more on the reddish tinge than others. :) I should mention that we spoke to many people who had been there for a week or more before us and it had been rainy and overcast the entire time! We were very lucky to get sunshine. I hear December is usually a good time to holiday in the D.R.

The resort had planned activities on the beach, such as volleyball, football, and baseball games. At one point, our group started a volleyball game and a bunch of people drop in and out of it for the next hour or more. Lots of fun. The non-motorized water activities were free, while anything that required a motor cost a small amount. Alia and Miranda went out on the Banana Boat once! That's where this banana-shaped balloon thing is dragged behind a motorboat and you do your best to hang on for 15 or 20 minutes. They come back to pick you up if you fall off. Alia fell off. Miranda clung for dear life. I wish I had pictures, but I was suntanning at the time and didn't know they were out on the water! Kayaks and canoes were available, boogie-boards...

Paul says that next time (?!!!) he would want to go for longer than 7 days. 10 days would be good, leaving a day on either side for travel-time. Alia would sooner leave directly from St. John's without stopping off in Toronto. I guess that's what we're going to look for next time. Next year? The year after? Who knows! I'm looking forward to it, whenever it is!! 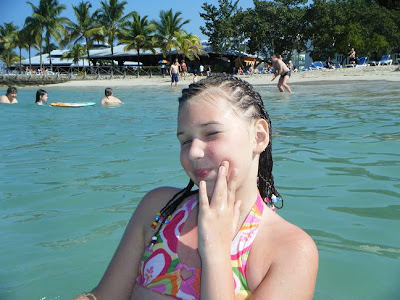 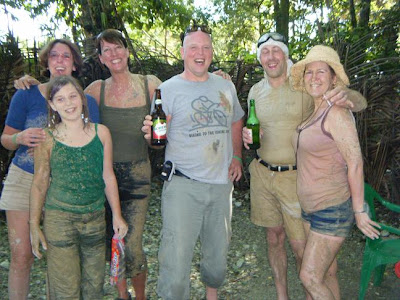 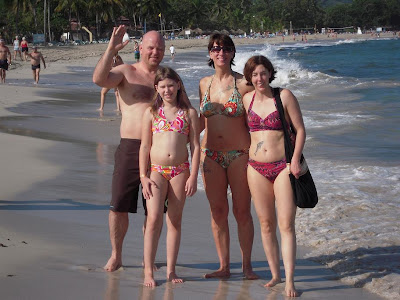 Posted by Christine at 8:51 AM