Paul and I rode out to Cape St. Mary's Ecological Reserve on Sunday. It was a really great day for a ride. The sun was shining, the sky was clear, there were lots of bikes out on the roads... really nice to see. Paul and I have these wonderful gadgets called "heated vests" that you plug into the bike and, with three settings, give you all the heat you could possibly want. Because I was sitting behind Paul, I kept mine on Low. Paul had his on Medium. Honestly though, I think we only used them because they were there. It was a gorgeously warm day!

For those of you who aren't familiar with Newfoundland, I should include a bit of geographic location information. :)  We live in Torbay, which is on what is called the Avalon Peninsula. It's that little axe-head shaped thing dangling from the south-east corner of Newfoundland, and connected by a narrow spit of land (is that called an isthmus???) to the larger portion of Newfoundland. We drove along the TCH to Whitbourne and then south to Dunville (a really pretty one-road town) and Placentia (not so pretty but it's a fishing village from way back so what do you expect? wtf?) and then down a series of (Holy shit the scenery is amazing!) coves (some of which had cows grazing at the beach's edge), until we got to St. Bride's followed shortly by Cape St. Mary's. Just FYI, we also drove through Patrick's Cove which is where Paul had one of his most spectacular wipe-outs (which probably took one of his 9 lives) on the bike two years ago. A "decreasing radius, descending blind hairpin" turn that he used to demonstrate the durability of his armoured biking gear. Gear worked. It took him the better part of the season to get a new jacket to replace the torn-up one. He took the turn in a much more moderate manner with me riding pillion.

From there we drove out to Point Lance. A sandy beach! What a sight for sore eyeballs. White sandy beach stretching as far as my admittedly weak eyes could see. Unfortunately, the sun wasn't shining so strongly by then, but the picture... *sigh* Yup. I'll be posting it asap. If the connection isn't too slow, I'll attach it here.

Okay... we drove some more. I took more pictures, some of which turned out, some of which didn't. We passed through Branch, Colinett, St. Catherine's, and then arrived back at the TCH where we fully intended to fill up with gas in Holyrood. We were supposed to go straight. Paul turned left. Oops. 10K short of our destination we ran out of gas on the side of the road. You know something? It's nice to know that people will stop to check on you. Okay, so not many of them actually carry a jerry-can of gasoline in their trunk, but still... They stopped. I finally got a ride to Avondale, 15 minutes from the off-ramp we were stranded at, and back. The guy paid for my gas and refused to accept anything (I hid ten bucks in a pair of sneakers in his back seat), and even broke a glass Coke bottle to use as a funnel. Ahhh... the kindness of strangers. Paul had several people stop off while he waited, and one, a biker, actually offered to siphon gas from his tank!! Wow. Paul apologized to me several times... I'm not sure why. It was all part of the adventure. No harm. All part of the game. We phoned home to explain our delay, dinner delayed on our behalf. All's well. Happy Father's Day.

350 K round trip. (My arse was numb just before we ran out of gas so I was glad of a bit of a hike) 6 hours riding. I found out that the bike can easily do 220kph with a passenger on board. Don't ask me how I know. Just trust me on this.

This is a really great trip. It took us a couple of hours to drive from Torbay to Cape St. Mary's.

Here's a couple of pictures from our ride. It was a bit awkward holding the camera in the breeze, but that's what the strap is for, right? 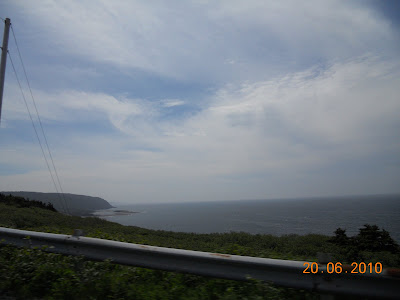 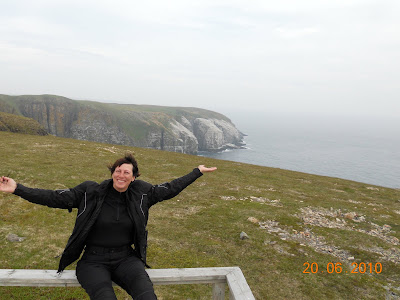 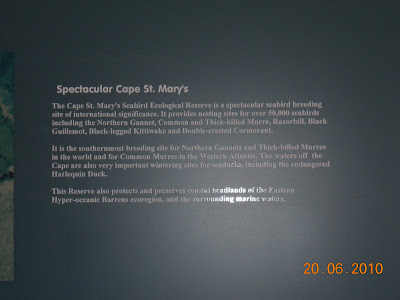 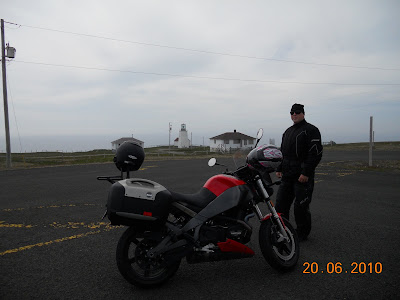 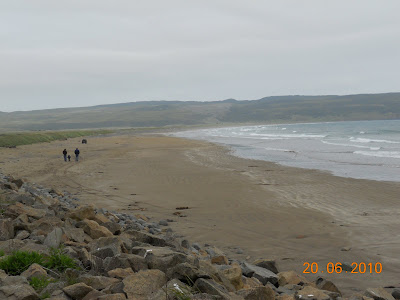