A rant. A lengthy one. Some disturbing images... 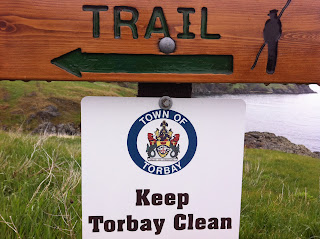 Last week I took the dogs for a walk down to Torbay’s Big Beach. The sewage outfall pipe has apparently been replaced and I’d heard rumours (unfounded, perhaps) that the large, yet invisible, signs warning people away from the beach were going to be removed. I even heard word of a big opening ceremony. Again, the rumours may be nothing more than that. Rumours.
So, there I was, walking the beach and very dismayed at my findings. I’m going to post the photos, as disgusting as they are. I’m sorry... but I think the impact of seeing it for yourself speaks more strongly than any of my words. 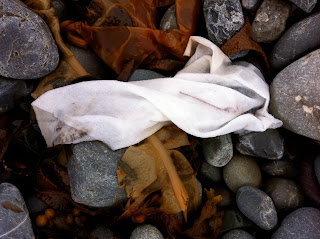 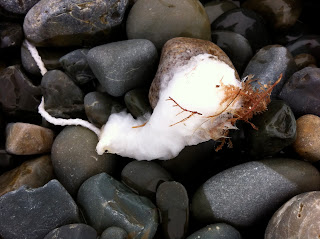 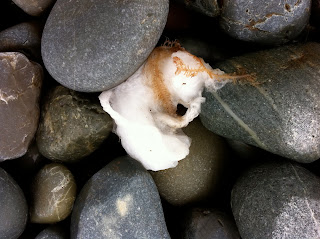 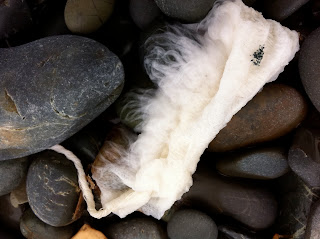 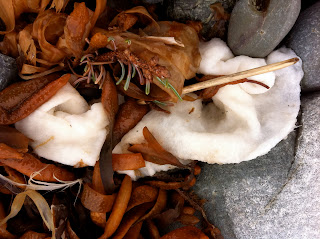 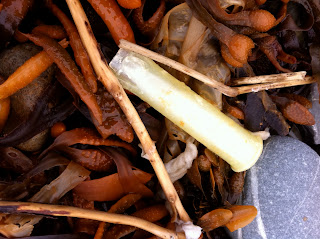 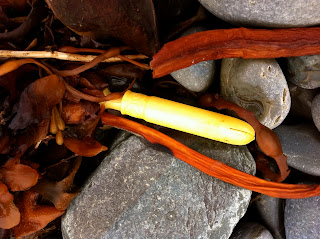 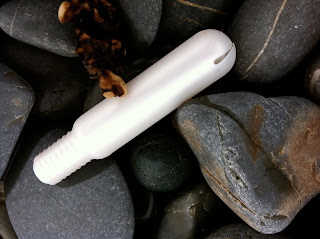 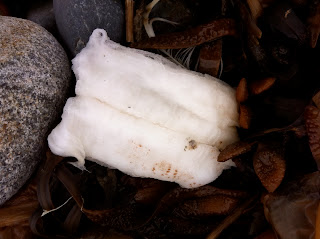 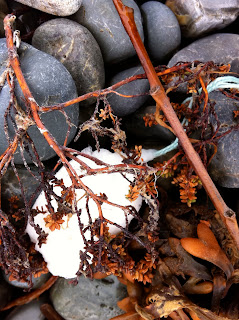 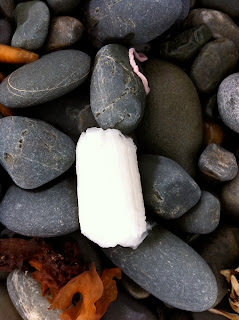 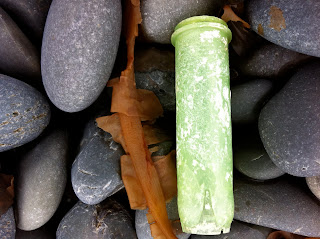 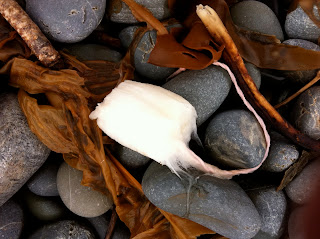 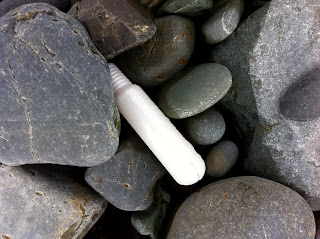 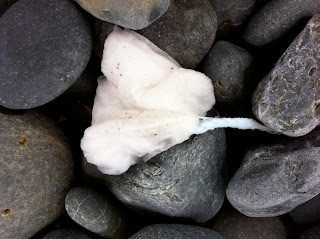 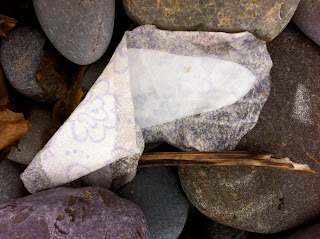 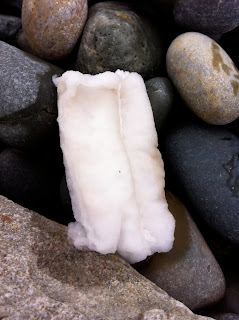 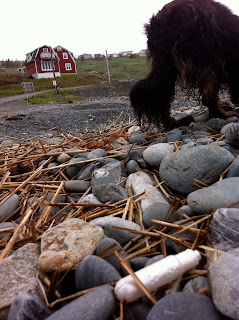 All these photos were taken during a 10-minute span of time. I didn’t have to go looking for any of the items, as they all stand out quite clearly. I don't know about you, but I read the package of tampons when I was fairly young and I'm sure I remember the instructions saying "DO NOT FLUSH" ... What is wrong with these women? Do they seriously not know any better?! You don't flush this stuff! While the fluffy cotton with is cute little string will eventually disintegrate, the plastic is NOT biodegradable!
There was a machine, affectionately called the “Muffin Monster” which was supposed to grind whatever came through the sewer pipe before it entered the bay, there to be spewed out and carried off into the Atlantic via the ocean current. I’d seen several examples of this machine’s failure to adequately chew up material ever since our arrival in Torbay. I thought I was looking at a scallop when I first saw one lying on the beach! We now call them “Tampy the Mouse.” It turns out that the machine isn’t even in the ground anymore. It was removed for repair (?) and it was advised (?) that it wasn’t truly necessary (?) as the new pipe was sufficiently far enough away from the shore to ensure that it wouldn’t wash back. (?!?!)
Apparently, that is NOT the case. I've been told that the "guys" go down and clean the beach "regularly" ... I'm sure it wasn't in their job description. I don't envy them. Apparently they pull a couple of bags of "stuff" out whenever they go down.
Capelin are coming soon. Think anybody will be fishing in Torbay?
Change of topic:
I thought you might be interested in seeing the result of the work done by the owner of the property just west of Tapper's Cove. (78-82 Dunphy's Lane, Torbay) This is the area where the large appliances, etc. were being thrown (looked like the town dump) and I understood he'd been ordered to clean up the mess. (Update: An Environmental Protection Officer sent a letter to Torbay's Town Council indicating that this mess was to be cleaned up by June 22, 2011. Inappropriate items, such as metal products like duct work, metal piping, heating radiators, and an old trailer undercarriage, children's toys, domestic garbage, old appliances and an old wooden shed, etc. were to be removed and properly disposed of.) (I happen to know that there's a wooden boat hiding in that pile, too!) If this is what he considers "cleaning up," I'd hate to have him in charge of any major works in town!


There's also a smelly sludge making its way down the hill, across the trail, and down to the ocean where you can see the murky guck swirling around against the shore. A section of the newly-minted East Coast Trail, just between the two sets of stairs (Tapper's Cove to Father Troy) is muddy, which isn't the worst problem. It stinks! STINKS! It smells like some sort of raw sewage is draining down. Several HUNDRED people walk that trail in a fortnight's period (Hello there all you Tely Hikers!), and each one of them must go through that section. I’d like to think that somebody else has noted the problem and informed the TECT and the Town of Torbay. However, most people seem to think that it’s surely somebody else's responsibility, or somebody else has already informed "somebody." 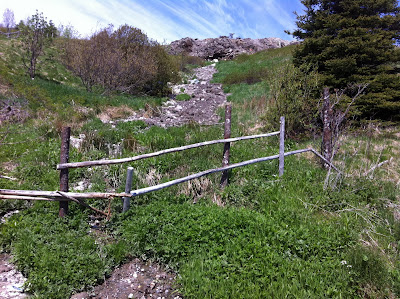 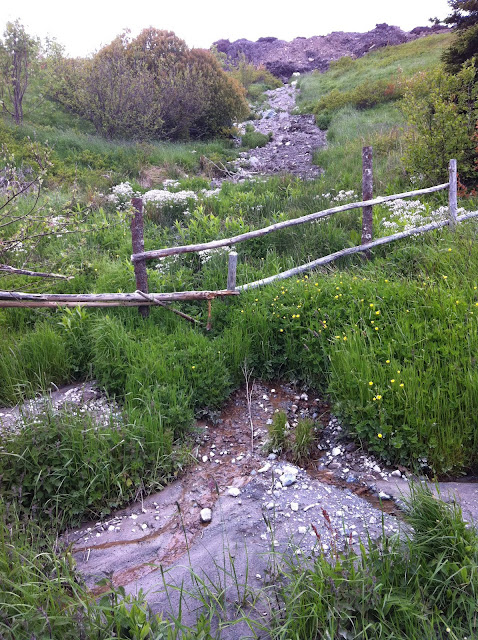 The first image is of the garbage which has apparently been left under the "soil." Is that really appropriate "fill" material?! I've taken other photos over the past year and sent them on to the town. Has there been any monitoring of what he uses and how he cleans it up? Doubtful, based on the speed, and the fact that I took a small video not long ago where a dump truck was pouring soil over the bank with the appliance-pile still sitting nearby. It's disgraceful that property owners are allowed to do as they like with their land, no matter what the repercussions to anything else affected by their actions.
Keep Torbay Clean? I'm more and more disgusted. There's no garbage bins at Torbay Beach for people to put their trash into. Shortly after we moved here, I spoke to one of the Town’s “people” about setting out concrete garbage bins and was told that vandalism was more likely to happen. People would throw the garbage bins into the ocean, as had happened at the Gully.
Well, gee whiz! Now they open their car doors and shovel their McDonald's and Tim Horton's garbage, cigarette butts, dirty diapers, etc. etc. etc. directly out onto the beach. Our family learned to take a plastic grocery bag on our walks so that we could pick up some of the debris found along the trail and on the beach. Pretty soon, the bags were too small for the job and we were lugging green garbage bags!  With the damage to the sewage pipe, I've been reluctant to touch anything on the beach, with good reason. I don't claim that garbage bins will be 100% effective, but who knows! It might help a bit! We can be taught!!
Further to the Beach debris... I'm also attaching a couple of photographs of campfire debris. A number of teenagers from the high school were down by the beach last week and apparently decided that the beach was a good place to leave their trash. Garbage bags, half-empty bag of marshmallows, a bucket... Teens aren’t the only culprits. I’ve seen remains of campfires on the beach where adults have been just as negligent in picking up after themselves. Apparently, somebody else will clean up after them. Or the ocean will wash it all away and that’ll be the end of the problem. *snort* Ignoramuses...

Here’s a few pictures of metal debris. Apparently, they’re segments of the old sewage outfall pipe. They're rusting and sharp-edged. I hope you're all up on your tetanus shots! And just think, there was some sort of "Mermaid" photo shoot done at Torbay Beach yesterday afternoon. I wonder how those are going to turn out with all the garbage on the beach? PhotoShop, I suppose. 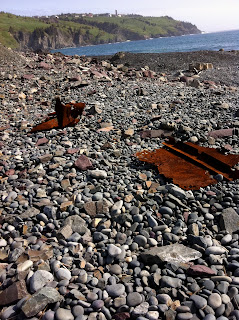 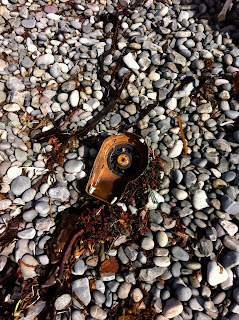 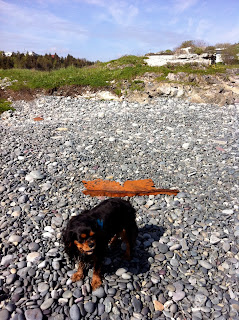 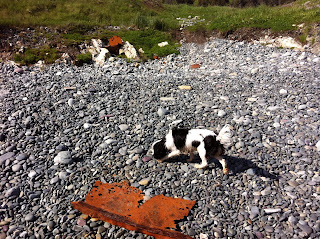 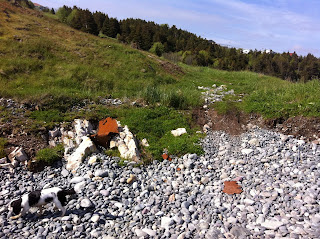 Despite the large, yet seemingly difficult to see signs, people still use the beach. Heck, why shouldn’t they?! IT’S OUR BEACH!!! We deserve for our beaches to be clean! Our oceans aren’t a dumping ground! If we don’t look after things, who the heck will? Some mythical authority figure? Psht... I haven’t seen much evidence of that lately. 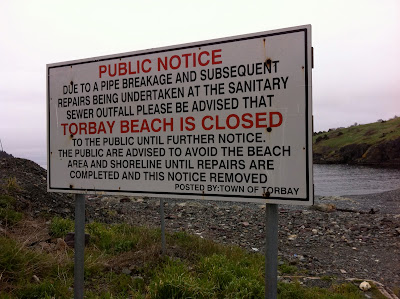 Rant over. For now. Thanks for listening. Hope it helps in some way to raise awareness of the problem and to truly, keep our town clean.
Posted by Christine at 1:29 PM