Summer is AWOL, and we discover "Stinky" the Mink

“Another blustery Monday morning. Rain for everybody... a bit of fog, a bit of wind. Quite strong winds. About 3 mm of rain. And there’s moose. So, be careful behind the wheel today!” ...  That’s the word from VOCM this morning.
A quick glance out the window corroborates the weather conditions. Yup. It’s raining and foggy. Again. *sigh* I thought it was heading towards summer.  It was dry and non-rainy this past weekend. The sun, while a bit washed-out, was shining. We actually sat out on our back deck for several beautiful afternoon hours, playing cards with friends. Somebody seems to have hit the Rewind button again.


Ah well. That’s the way it goes. I’m sure that once we have summer in our grasp, all pains, agonies, and suffering will be forgotten and forgiven. I can hardly wait!
Moving on...
Paul found a baby mink on Friday night! It was chirping miserably on the parking lot of the Torbay Circle K, attracting a lot of unwanted attention from a pair of circling cats. He watched and waited for nearly half an hour to see if Mama Mink showed up for a rescue. No such luck. He says that he squatted down and reached out his hand and the little thing scrambled over and crawled in for a rescue. 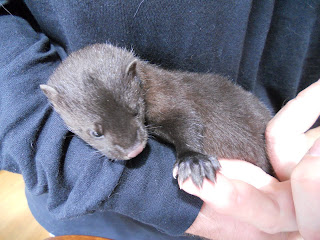 You know your rough, tough, he-man is a softie when he shows up at the door with a ragged little bundle of fur snuggled in the crook of his arm. A STINKY little bundle of fur! There’s a very good reason that ferrets are de-scented. This guy has his musk glands firmly in place, and when he gets stressed... whew! Imagine the very worst smelling underarm scent you’ve ever encountered. (think back to that hot summer day when you sat on the bus with the sweaty, smelly guy next to you!)  DOUBLE IT. You’re getting close.
Fortunately, we’re not noticing it so much anymore. (It’s Day 3) Either we’re getting used to it (it’s not all that unpleasant in small quantities), or our noses have had their linings singed off. Considering our Saturday afternoon guests noticed a slight odor, but weren’t offended by it ... his quote was “I like it!” ... it’s not that bad. Actually, I kept circling the kitchen in an effort to discover the source of the horrid armpit stink, (yes, I’m weird), only to discover that the smell was coming from the package of fresh basil!
We tried contacting the Wildlife people, to no avail. Did you know that Government services close down over the weekend?! The SPCA didn’t want anything to do with it. Even Heavenly Creatures, as helpful as Jessica was, couldn’t do anything for us.
No worries. We’re going to feed him up for a week or so and then release him ourselves. He’s eating well. Very well. I wonder if they eat until they bust or if they self-regulate. Hmm..
Because he has such tiny baby teeth, we figure he’s just teething now. We fed him small bowls of evaporated milk mixed with water. A 1: 2 milk to water ratio seemed to be favored. Some canned cat food, using the sample of Taste of the Wild that I picked up at the NL Pet Expo last weekend. I started thawing the feeder mice I keep in the freezer for our snakes. I thought, since he’s a small critter, we’d begin with the smallest size available. I was impressed to see him chomping through a half-frozen hopper! I picked up a handful of minnows from the pet store, and he seems to have enjoyed the first one, once he found it. I guess it doesn’t have a strong odor. Their noses aren’t their strongest asset.
We’re thinking that we should let him get some exercise so he doesn’t turn into a fat lump of furball with poor digestion (think of your last airline flight!), so we started releasing him into the downstairs bathroom for feedings. I’m planning to set a pan of water down for him to explore. Mink are semi-aquatic hunters and damn good swimmers, but the bathtub experience was traumatic. A smaller setting might be more appropriate. Tossing a pair of minnows in for good measure. Something for him to chase and catch.
lol... which reminds me of last evening! Our next door neighbour has one of those live-trap mouse catchers. She caught a mouse and offered it to us for little Stinky. Let the fun begin.
Sequence of events:
Set trap in mink bin.
Slide open the trap door.
Mouse FLIES out.
Mouse zooms around mink bin and returns to trap.
Flies back out of back side of trap.
Decision is made to remove the trap so the mink has a chance to catch it.
Open mink bin.
Mouse flies out of mink bin and zips into kitchen.
Mook and I scream. I dance in place, my heart going pitter-patter. Mook jumps onto the couch.
Regina and Paul scramble after it, dustpan in hand. Paul laughing like a loon.
It took some work, but the dreaded mouse was soon clobbered and ready for re-insertion in the bin.
BUT!!!  ... there’s always a “but.” ... There was a second mouse in the trap! Who knew?! It took advantage of our distraction with his compatriot and also flew out of the mink bin. (More screams from Mook and I.) This one stayed behind the buffet in the dining room. It took a bit more work to finagle it out, but again, the dustpan proved to be a good tool for sedating the damn thing. So, two adult mice, one live, one definitely deceased.
Moments after putting the still-barely alive one in, I heard a startled squeak, cut off quickly and replaced with a sort of crunching noise. Apparently, Stinky starts at the head and works his way down to the tail.
Well, we know he’s capable of eating larger prey. Now we’re going to see if he can catch it himself. I’m not sure how to do that. I am sure I don’t want to go through the role of mouse-catcher again.
It’s kind of interesting to have a wild mink around. We looked on the ‘net and found that many people have taken them on as pets. Probably the domestic ones that are used in the fur industry. Apparently there’s a window of opportunity when they’re young where you can socialize and tame them. Ours is probably in that window, but we’re more keen on releasing him into the wild than turning him into a pet. With that in mind, we’re not handling him more than necessary. Leather gloves. Did I mention he was able to eat a half-frozen mouse?! I like my fingers just fine where they are.
He strongly resembles a black ferret with a white chin-spot. Heavier headed, longer and stronger neck, and solid bodied. Soft, plushy coat. I can understand why people favor them as coats. But he’s got such an expressive face and I’ve watched a few of them cavorting in our stream over the last few years. They’re beautiful to watch! How could you peel the skin off and wear it? I don’t get it. 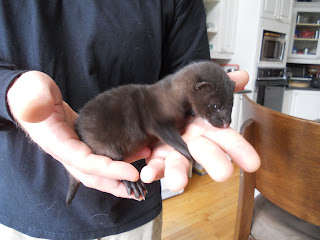 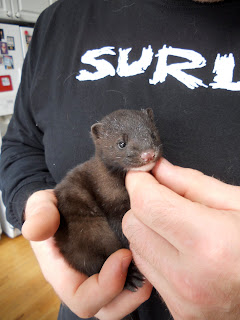 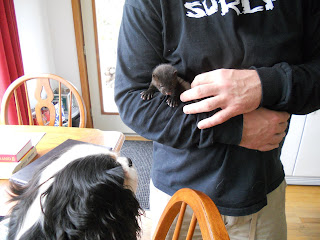 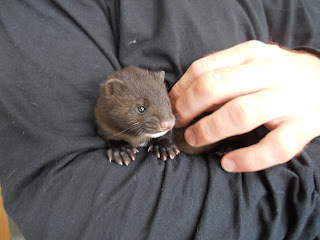 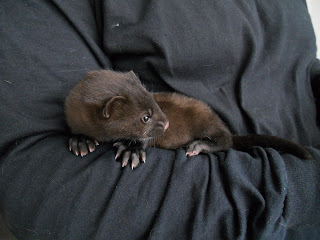 Posted by Christine at 9:54 AM