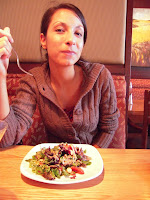 It's been a while since I've been here. Too many other things going on, I guess. Went to Winnipeg to visit with Dana (Hi, Dane!!!) and had a fabulous time. Ethnic food galore (oh yum!), shopping and hanging out with Dane! (yaaaayyyy!) We watched a few movies, some of them repeaters. Buffy the Vampire Slayer episodes are proceeding apace. Dana! Stop watching them!!! This is a "you-and-me" thing to do. Otherwise I'll start watching them with Alia! Yes. She's asking. ... hmm... It means I might get the whole series watched before I'm 60. *thinking*

Ron and Diane's wedding out in Grindstone National Park, Confusion Corner Bar and Grill with Dana (Beach Salad!), all the fun stuff. *sigh* It's going to be a long time before next summer comes around.

Dana learned to knit not long ago. She kept at it, even while I was visiting. She asked if I'd like to learn. My response was a pretty big "NO WAY!" ... After about a week, I'd softened up and asked her to show me. It seemed pretty easy.

Note to self: Never try learning something new when you're exhausti-pooped and stupid-blind. I couldn't even count as far as 2 on a continuing basis. Ah well. I got over that little learning bump and have since been doing pretty well. 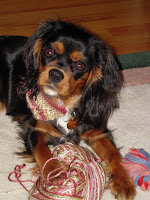 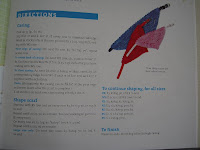 og collar-cover with a neckerchief attached, turned out pretty well. Unfortunately, it's the wrong size scarf for Niki. I have to find a smaller dog to give it to. Try again with the larger size! I'd also like to get a sweater knitted for Niki before it gets cold. Poor puppy... don't want her to freeze!

The second project was hilarious. I think I must've cast-on about half a dozen times before I finally got it! Then I'd stitch a couple of rows, realize that I'd messed it up and proceed to tear the whole thing out! Argh! I finally stopped being the "anal knitter" and left it as is. The shawl took much longer than the pattern indicated it would take, but it's finally done. Funny thing though, I kept making longer and longer rows, thinking that I was making the part that lays over the shoulders with each pass. Nope... not so. It turned out that the beginning part that I'd ripped out repeatedly until the yarn was actually a bit fuzzy-looking was the top-centre. Right at the nape. *sigh* Fortunately, it looks gorgeous everywhere else. I refuse to look for mistakes and I push Alia's comments aside every time she tries to say anything about it. She's quit now.

Project three is well on its way! Another shawl, but not the triangular kind. Something a bit different, and using a boucle (eep!) yarn instead of the thick bulky stuff.

Pictures to follow. Honest!
Posted by Christine at 3:53 PM