It took a while to get back to sleep after all that excitement. Yes, believe me, it's exciting to get up in the middle of the night to wander around the house and get dripped on/step in puddles/dart into the darkness outside to close the storm door while getting completely soaked. I finally slept for a couple of hours, but woke up around 6:30. Ungodly hour of the morning. I don't understand how people manage that every day of the week. *quizzical frown* Good thing I got up though. Some of the towels were already sopping wet and needing a change. While I was up and making coffee (lucky Paul), I decided to take a picture of the stream/waterfall. It was doing some sort of acrobatics at the bend just before the pool deck, leaping about 6 feet into the air before wending its way down and around to the bay. Eeep! *note to self: insert picture sometime soon. Preferably before it goes missing in the Pictures folder*

Here's the photographs from Pat of the Yorkies with their red and white dresses *ahem* sweaters on. They look adorably silly. lol... dog clothes... 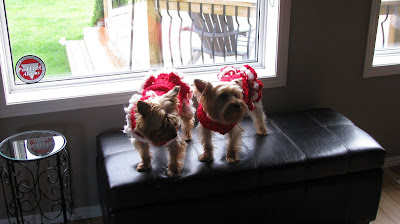 These days I'm busy knitting baby shower gifts for Alia's friends, Anna and Teri. A pair of (omigosh they're so damn cuuuute!) kimonos, some kind of dumb looking toques (sizes range from Papa Bear, Mama Bear, and Baby Bear), and a pair of cuddly bunny things. I'll have to remember to take a picture of them and post them once I get downstairs and download them from the camera(s). Procrastination is becoming my new middle name. Why not? It's popular!

Must remember to take the Malibu-bu in this week to get the oil changed. Can't procrastinate that for too long.

The new Echo is a cute little car. Sounds a bit like a lawnmower sometimes, and Paul's always warning against pushing it too hard at start-up. I still think it says "I think I can, I think I can," as it chugs up the hills. Hope it does well in winter. Paul says it did a bit of a wheelie on Marine Drive the other day... the wind caught it and tossed it onto 2 wheels! Got lessons from him on how to re-ground the vehicle if it ever (hope the hell not!) happens to me... turn AWAY from the wind. Kite strings, anyone? No, no... that's for Niki, for when she goes outside in the heavy winds!

Ciao for now. This is a boring post so I might as well leave asap.
Posted by Christine at 1:42 PM